Last year I posted a similar article, and I actually enjoyed writing that post as it also served as a reminder of all the memorable things that I did or happened to me (some not so glamorous as others)! So I decided to do this again, and once again you'll get the chance to creep into my life by reading the most memorable moments in my life this year. Some of these events are not milestones but simply events that marked my year, and as meaningless as they might seem to some people they were memorable to me!

Visiting Tokyo was a surreal experience, and probably THE best trip I've had up until now. Traveling alone to Japan was a bit scary but it made me realize that I'm capable of so much on my own. It was a beautiful experience to explore the city, and get a glimpse of their culture. Japan definitely took a piece of my heart, and I'll go back when I get a chance!

My sister believes the beach heals everything, and I might think she's right. I really needed some beach therapy, and being in Mexico for a week was amazing. It had been a while since I had been to a family vacation, and it simply felt great to relax under the sun with loved ones. It felt amazing to unwind, and recharge energy by the ocean.

During my visit to Japan, I had a couple of things that I wanted to check off my bucket list. One of them was to experience an Onsen also known as a hot spring. Due to Japan's volcanic activity it has become one of the best places in the world to mellow out in a hot spring. It's similar to an occidental spa but you're fully naked, (men and women are in separate areas) there are some common areas but they provide a robe, and towels. I won't deny that it was a bit intimidating to be fully naked, and to be surrounded by other Japanese women but after some time I just got use to it. No one stares and everyone is just relaxing; it was quite wonderful.

For a while I wanted to get a pet, and I've always had a fascination for birds so this summer I decided to get a parrot! Bringing Coco into my life has been a real blessing. He's the cutest Quaker parrot, and he brings so much joy to my home. A lot of people have asked me "why not a dog or cat?" well I just really love birds, and birds are pretty cool; I mean Coco can talk! Almost every week he's learning a new word, and he simply melted my heart when he said " I love you" :)

A not so glamorous moment this year was when I had to visit a clinic in China during a work trip because my stomach was very upset. I'm very fortunate to have amazing coworkers in China that were kind enough to take me to a foreigner's clinic, and I was attended quite promptly. To my own surprise the doctor was from South America, and I was telling him about my symptoms in Spanish! This was probably the most random moment of the year!

6. Going to Disney Sea in Tokyo!

I got to visit Disney sea in Tokyo!!! I feel like this article should have been named "top things that I did in Japan!" I'm a huge Disney fan, I'm a real kid at heart, and going to Disney sea in Japan was absolutely amazing. It was really fun to do all the rides, and eat delicious Disney food! I'm not sure if I'm the only one but I really find Disney food very delicious! Visiting Disney was probably THE best day of 2018, it was truly magical!

7. Getting back into the Groove

I've always felt the need to have some music in the background to function at work but this year I've really made an effort to find new artists or revisit old songs to make my play list. I've discovered new artists such as Lennon Stella whom many already know but she was new to my repertoire, and Charlotte Lawrence, Sigrid, Anne-Marie, Leon, Carla Morrison, CYN, Mon Laferte, and many more. Their music is creative, and very refreshing to listen; I encourage everyone to check them out!

This fall I decided to try "lash lift" I was very curious to see how it worked but also slightly worried as I've never done anything to my face (aesthetically as in lash extensions, micro blading, fillers etc). The experience itself was fine, and the lash lift lasted about 3 weeks but after some time the lashes looked tangled... I wasn't very happy with that look. I wasn't sure if I had to get them retouched or just let time pass... After 3 months my lashes are back to normality, and I don't think I will try it again! Major beauty fail!

Being single has helped me to clear my head, and give myself time to heal but I've also experienced awkward moments with the fellows. Earlier this year I went to get a massage to relax, and kick back but little did I know that I would be asked out on a date while laying naked on a massage bed. The male masseuse had never heard of professional boundaries, and instead of feeling relaxed I came out feeling harassed; it was a very uncomfortable situation. I'm definitely never going back there!


I always felt self conscious of my legs but this summer I decided to just give them another chance. I started by wearing my first pair of shorts at Disney in Tokyo, and I got another pair for my trip to Mexico, and by the end of the summer I had 3 solid pair of Levi's shorts! I'm now obsessed with denim shorts, and I'll get some more for this upcoming summer! 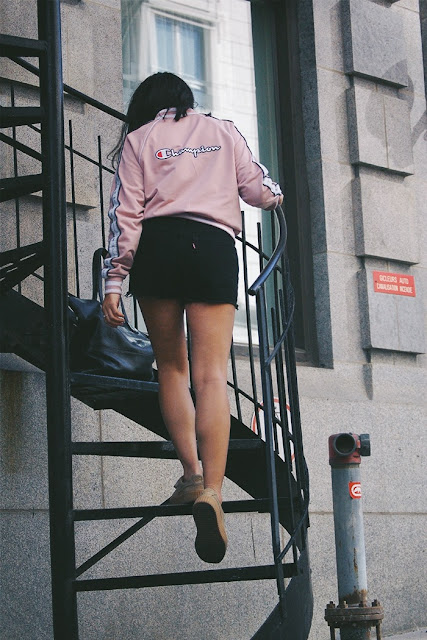