Some might say they're copies while others might say they are very good dupes... it's all debatable! Some of these items are very fast trends and let's be real not everyone can afford expensive shoes and even then for some people the dupes are still pretty high priced. Now I'm always advocating for people to invest in key items especially in footwear as you can wear them season after season... but I'm also guilty of falling into these temporary trends and let's be honest I don't want to break my bank account for a seasonal trend. 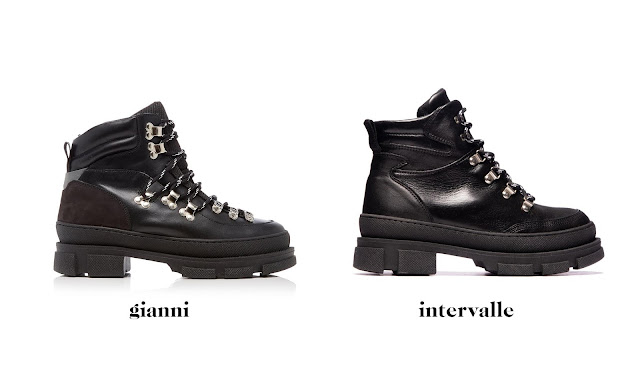 Lug soles have become THE biggest trend for this fall/winter and they will most likely continue into next fall. Here is a clear example of an outsole that might come from the supplier but they are produced for different brands... they are very similar and showcase the same trend of hiker influence. The main difference is the price, Gianni retails for 530$ and the boot from Intervalle retails at 170$.
I do believe you're getting pretty good quality for a good price at the Intervalle because it's all leather and made in Portugal.  I also appreciate how they have interpreted their own version of what other higher end brands are doing with the heavy lug soles such as Prada, The Row and Jil Sander. 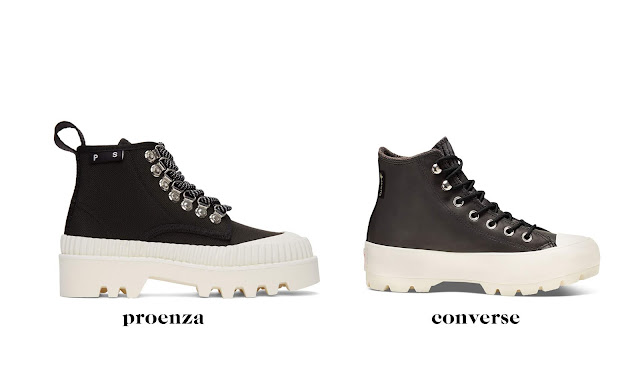 I actually noticed the Converse style before seeing that Proenza had a similar sneaker boot style. They're both similar with slight differences and I personally prefer the Converse sneaker boot not only because the price tag is reasonable at 150$ but also because it's made of GoreTex Leather making it waterproof and much more weather proof than the linen version from Proenza which retails at a whopping 775$... 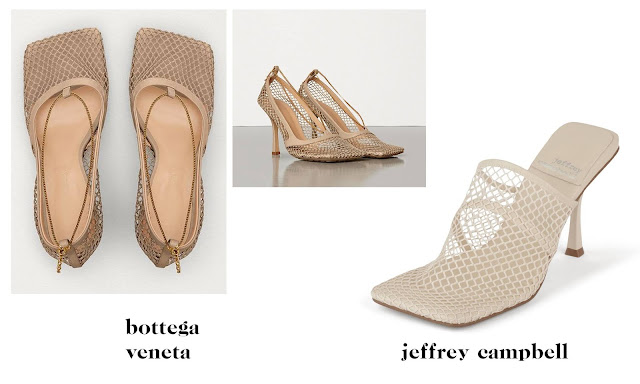 Now these Bottega Veneta have become highly coveted by everyone because all the celebrities are wearing them but the hefty price tag of 1325$ isn't something everyone can splurge on. Now Jeffrey Campbell came out with their own version which isn't exactly the same but we can agree the inspiration is drawn from Bottega.

I wanted to show some examples of shoes that are inspired by higher end brands, it's never fun to get copied and have someone else dumb it down to a cheaper option but at the same time nobody is reinventing the wheel in fashion and sometimes I personally believe it's unfair to think that only wealthy people should be able to wear fashionable items... it's a sensitive topic in fashion but at the end of the day fashion isn't saving the planet and it should simply be fun and priced reasonably, don't you think?